Mass spectrometry is an art of measuring the weights of atoms and molecules. It has emerged as a powerful micro analytical technique not only in determining the molecular weight but also in structural elucidation. Mass spectrum of a compound is its “chemical fingerprint” as each class of compound possesses its own characteristic spectrum.
The origin of mass spectrometry is from the discovery of positive rays in gas discharge tube experiments to study the conduction of electricity by gases at very low pressure. Eugen Goldstein in his experiments on discharge tube using perforated cathode found that there are a beam of positively charged particles originating from the anode, moving towards the cathode. He called these as “Kanalstrahlen” meaning Canal rays. Wilhem Wien found that these rays can be deflected by electric and magnetic fields according to their mass to charge (m/z) ratio. The m/z ratio of the particles in the canal rays were found to depend on the nature of the gas taken in the discharge tube.
J.J. Thomson carried out further experiments on these positive rays to find out the particle responsible for the positive charge. He found that each element possesses its own characteristic positive ion and some possess more than one. This led to the discovery of isotopes. Thomson discovered two isotopes of neon, 20Ne and 22Ne. He isolated these isotopes using his positive ray parabolae apparatus, the first mass spectrometer in history. He applied electric and magnetic fields to the positive rays generated in the discharge tube in a perpendicular fashion, which separated the ions according to the m/z ratio.
Later on Francis William Aston improved the positive ray parabolae apparatus and built his mass spectrograph, the ancestor of modern spectrometers. He subjected the ions to electric and magnetic fields separately making the ions to deflect and focus on a particular point on the photographic plate. Thus he could scan a particular mass range by adjusting the fields.
Earlier the mass spectrometers were predominantly used by inorganic chemists to discover and characterize different isotopes of elements. It was observed that there were background spectra which were characteristic of the lubricants and other organic fluids associated with the instrument. There begins organic mass spectrometry.
Now there has been an explosion of knowledge in the field of mass analysis. Mass spectrographs became mass spectrometers. Now it can be used to get structural information of a wide range of molecules including biomolecules which is made possible by the development of different ionization techniques. The first application of mass spectrometry to amino acids and polypeptides was reported in 1958 by Carl-Ove Andersson.
Nowadays mass spectrometers are used as detecting systems in chromatographic techniques in the so called hyphenated techniques- GC-MS, LC-MS etc. Being the combination of two micro analytical techniques, they are superior to the conventional mass spectrometry. By the advent of tandem mass spectrometry, it is now possible to take the mass spectrum of a mass spectrum. 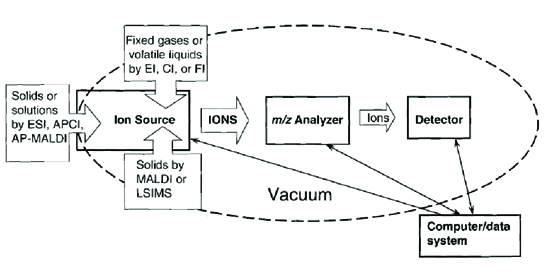 THE ESSENTIAL PARTS OF A MASS SPECTROMETER

THE TECHNIQUE OF MASS SPECTROMETRY

Molecular ion- It is the intact molecule devoid of an electron and the ultimate precursor of all the fragment ions
M (G) +E M+.+2E
M+. is the molecular ion. It appears at an m/z equal to the nominal molecular weight of the species
Base peak – It is the most intense peak in the spectrum with an intensity of 100.

Meta Stable Peak – Diffused non integral peaks due to the ions formed in the field free regions in the mass spectrometer.
M1+ M2+ + NEUTRAL MOLECULE
The detector detects this ion at a mass m* = m22/m1
Resolution – It is the ability to separate two closely lying peaks in the mass spectrum.
Resolution = M/M
M and M are the m/z values of two closely lying peaks in the spectrum 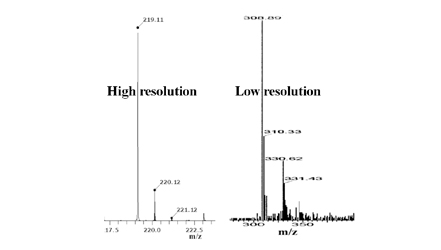 Ionization and mass analysis are the most important processes in this technique which categorises the different mass spectrometers used for various applications. The conventional method, electron ionization has some limitations and we employ techniques like chemical ionization, fast atom bombardment technique, Electrospray ionization etc.

Ionization and mass analysis are the most important processes in this technique which categorises the different mass spectrometers used for various applications. The conventional method, electron ionization has some limitations and we employ techniques like chemical ionization, fast atom bombardment technique, Electrospray ionization etc. 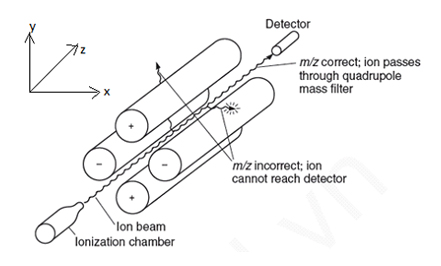 The four rods (Quadra poles) are connected to a dc source superimposed by a radiofrequency. The ions are made to pass through the space between the rods oscillating in the x and y directions. At a particular dc: rf ratio, ions of a particular m/z only reach the detector. Others develop an unstable oscillation and are deflected from the path to the detector. 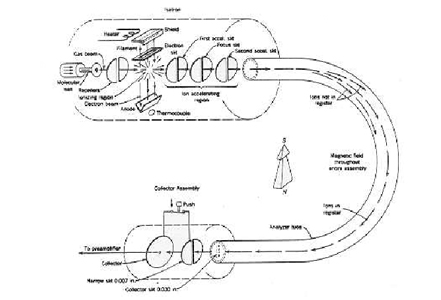 (ref: www3.ul.ie)
Double focusing mass spectrometer- It is a high resolution instrument where the ions are subjected to electric and magnetic fields in a tandem manner. The electric field selects ions of a particular energy from a bunch of ions with varying kinetic energies and the magnetic field sorts them according to the m/z ratio. Since two selection procedures take place, it provides high resolution. 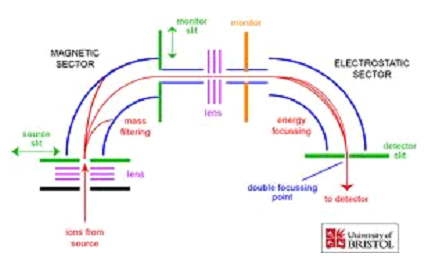 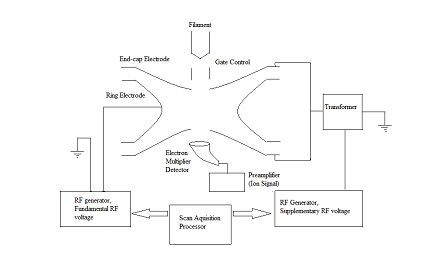 It is the spherical configuration of quadrupole mass filter. Here too a dc superimposed by an rf frequency is given to the so called ring electrode and the end cap electrode. Storage and ejection of ions of the desired m/z is possible by adjusting the dc:rf ratio. 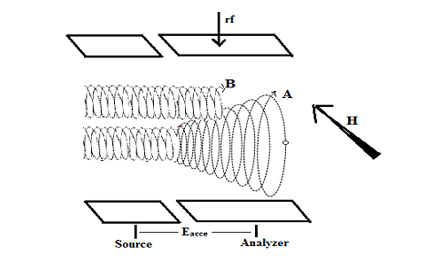 Here the ions are held in a cubical box by electrical and magnetic fields. The ions precess with respect to the applied field with a particular frequency. An rf frequency is applied and when its frequency equals that of the precessional frequency, resonance occurs. The resonating ions follow a cycloidal path of increasing radius and produce a signal at the detector.

The whole range of radiofrequency is given simultaneously and the ions are made to resonate, an interferogram is obtained. Using Fourier transform technique it is converted to a frequency domain spectrum which in turn yield the conventional m/z spectrum. 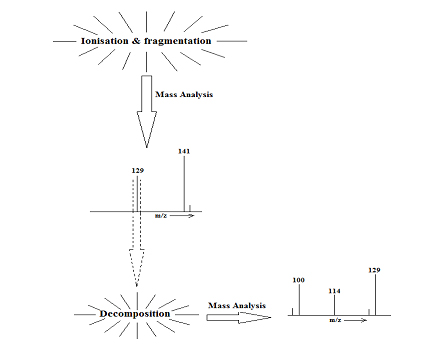 Several mass spectrometers are used in the first and third stages, but the triple quadrupole and the Q-TOF being the most popular of all.